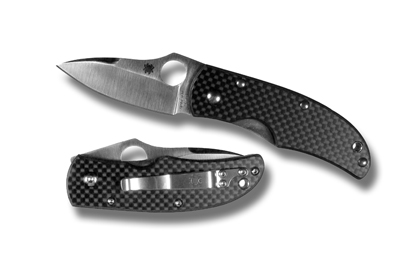 Michael Walker is to the knife industry what Michael Jordan is to basketball or Wayne Gretzky to hockey. He shattered established standards, jumping into unchartered ground and elevating the craft of knifemaking to greater heights of innovation and modernism. He is a cutlery industry mogul.

By 1980 the folding knife industry had few new sit-up-and-take-notice lock innovations since the traditional lockback. In 1981 Walker invented, developed and eventually trademarked the Michael Walker LinerLock®. Linerlock-style knives, in crude form, had been around since the 1800s mostly as electrician's knives. Walker refined and mainstreamed the lock by adding a leafspring which locked the blade open, making it into a true one hand open folding knife. He also included a detent to hold the blade closed using the spring force from the liner so it didn't open in a pocket.

It has a weight reducing swedge at the spine, a spine cusp for thumb placement and is PlainEdged. Added to the performance driven blade is a buffed carbon fiber handle, with screw-together construction. Inside a single liner doubles as the LinerLock. Attention to small finishing details sophisticate it further, such as a pipped lanyard hole and tip-up, right hand pocket carry clip.