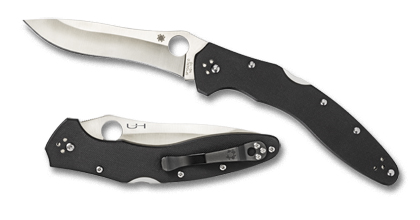 The Ulize is a slim, stylish folding knife designed for both performance and ease of carry. Its blade is hollow ground from VG-10 stainless steel and features a dynamic recurved profile. This sinuous blade shape combines a well-centered point, a curved “belly,” and a subtly recurved edge to maximize the cutting performance of all areas of the blade. Strategically placed jimping on the blade’s thumb ramp provides a positive index for the user’s thumb and ensures superior control during all cutting tasks.

The handle of the Ulize is built on a framework of skeletonized full stainless steel liners and a stainless back spacer. This construction style supports the knife’s mid-positioned back lock mechanism and provides extreme strength while minimizing weight. Textured G-10 scales encase the handle along its entire length and are bead blasted to further enhance its grip. A four-position hourglass clip supports deep-pocket tip-up or tip-down carry on both the left and right sides. These carry options, along with the knife’s back lock mechanism and Trademark Round Hole™, make the Ulize completely symmetrical and fully ambidextrous.

In the open position, the Ulize manifests a continuous flowing curve from the butt of the handle to the tip of the blade. This curve and the handle’s exceptional ergonomics not only make the Ulize extremely comfortable in the hand, they also create a slight negative angle of the blade that increases the pressure of the edge during cutting, enhancing overall cutting performance. The blade’s negative angle also shortens its arc during opening, guaranteeing swift, positive one-handed blade deployment.

The Ulize is an extremely unique folding knife perfectly suited to the needs of its intended audience and many other knife users.

Design Inspiration
The concept for the Ulize began with a German policeman nicknamed “Sony.” A long-time fan of Spyderco knives and particularly the Police model, he thought there was merit in the idea of a folding knife designed specifically for the German police. In addition to serving as a functional utility tool for his fellow officers, he thought that the sales of such a knife could be used to benefit the families of officers killed in the line of duty. Based on this concept, Sony approached accomplished German custom knifemaker Ulrich Hennicke with the hope of getting him interested in the project.

Hennicke, a master craftsman known for his exquisite hand-forged Damascus blades, began his career in knifemaking in 1996. After visiting the Mainz artist’s market, he became fascinated with custom knives and ultimately apprenticed under Hermann Gradinger. Although his first knives were made by stock removal, he quickly graduated to forged blades and began making knives full time. His beautifully handcrafted knives are highly prized by collectors worldwide.

Hennicke liked Sony’s idea and agreed to participate in the project. With Sony’s input, Hennicke set about designing a knife that retained all the salient qualities of the original Police model, while incorporating his own distinctive design flair. The result is the Ulize, which takes its name from Ulrich’s nickname “Uli” and the German word for “police.” Hennicke produced a prototype of the knife and presented it, and the project concept, to Spyderco’s founder Sal Glesser at the IWA trade show in Germany. Based on the public’s positive response to the prototype and the project’s noble cause, Spyderco decided to manufacture the Ulize. It was released in 2012.