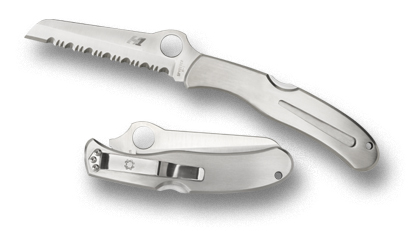 Broadening Spyderco's rust-proof Salt Series Line of knives is the reappearance of the classic all-stainless Mariner Model with an H-1 steel blade. The original Mariner set the bar for stainless handled boating and sailing knives in the 80s and 90s. It had (and still does) a Sheepfoot blade, slim profile and shackle key/drying vent but is now available with a 100% rust-free blade, handle and clip.

Salt Series knives feature blades made from H-1 steel. H-1 is a non-rusting alloy comparable in edge retention to established high carbon knife steels. Notably different, it's made using nitrogen rather than carbon. Carbon creates hardness, thus sharpness, but is also the instigator in generating rust when it reacts to chloride. Substituting nitrogen for carbon makes steel harder and edge retentive but nitrogen doesn't react with chloride- so rust never even starts.