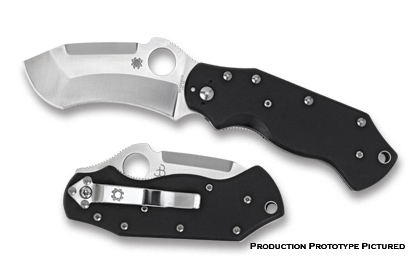 All eyes were on knife designer Jason Breeden's knives at a recent knife show; drawn to his folder with a blade shape unlike anything knife enthusiasts had seen before. The lower half of the blade was curved like a Hawkbill blade but its bulb-like tip was perched on top the curved portion, almost like a head on a neck. When someone asked the designer he replied, "My designs are born from need I've experienced. I live in the Appalachian Mountains and am regularly outdoors or in water. A recurve blade has cutting advantages in water but I also wanted a strong tip for outdoor applications."

Spyderco included a Round Hole resulting in the Spyderco/Jason Breeden Captain. The blade's unusual shape creates two opposing cutting angles, one curving inward, one out. The inward curve holds what you're cutting in contact with the sharp edge, ideal for downward pulling cuts and for cutting rope and line. The outward curved cutting edge bulges out at the blade's tip for close-in controlled cutting- a motion used when skinning, whittling and slicing horizontally in a wrist sweeping motion.

The blade is PlainEdge hollow-ground VG-10 with a weight reducing spine swedge. Its G-10 handle has a Walker LinerLock and two full-length steel liners tucked inside for rigidity and strength. Angularly shaped, the handle is comfortable in different grip positions and has a black steel pocket clip designed for 4-way ambidextrous carry. Its appearance is unusual but the overall design defines ergonomics and versatility indoors and out.