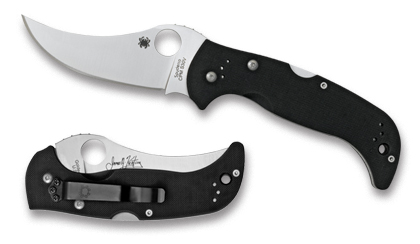 James A. Keating is a Master-At-Arms and acclaimed knife designer. He joined forces with Spyderco several years ago to develop a knife called the Chinook. The original design has since been refined, tweaked and upgraded several times and has a new name, the James Keating Chinook 3.

Like the original, the Chinook 3 is an ace in the field or as a martial arts knife where hard-use is a certainty. Lock strength requirements are higher for an outdoor or martial arts folder so the Chinook 3's back-lock is one of the strongest found on any Spyderco folder. The G-10 handle blankets a pair of full-length steel liners nested inside which are skeletonized for strength without added weight. Jimping (texturing) on the blade's spine generates tactile resistance keeping the knife slip-free and keeping the hand controlled and connected on the handle. Classified as a modified Bowie, the CPM S30V blade has also been upgraded to fully flat-ground from the cutting edge to spine. A four-way clip carries tip-up or down and left or right-handed for several draw options.