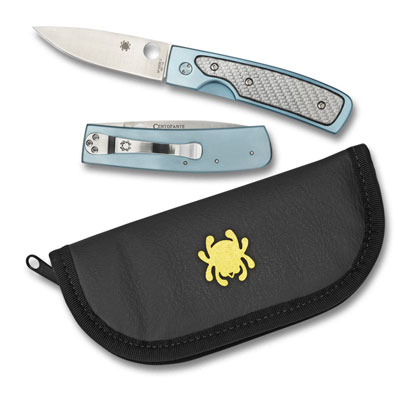 There are many things people do know about custom knifemaker Frank Centofante. He was a respected knifemaker for forty years. He was the president of the American Knifemaker’s Guild for over a decade and that he passed away in 2009. Not generally known about Frank is he was a fireman, devoted family man, an occasional prankster and would generously share his secrets of successful knifemaking with anyone who asked. For many years Frank was a key contributor in educating Spyderco’s manufacturing team, teaching them to learn how to recognize, appreciate and build quality knives. His advice was sage with him saying often “if you can’t see the difference…you can’t build the difference.” It is in his memory Spyderco releases the C155 Memory folder by Frank Centofante.

The understated Memory shines with elegant refinement and a blued titanium handle with a silver–colored woven-glass fiber scale layered over the handle’s front. Inside the handle is a Michael Walker designed LinerLock and adorning the back scale is a right-hand, tip-down clip. Although Frank’s custom knives took on varied and different looks, his signature bearing was the spear-point blade. A trait is carried over to the Memory, with a VG-10 flat-ground classical spear-pointed blade embellished with a Spyderco bug behind the Spyderco Round Hole. Packaged in a black zippered pouch, the folder will be carried, coveted and is guaranteed to become a key piece to many knife collections and by anyone appreciative of late Frank Centofante and his knife designs.