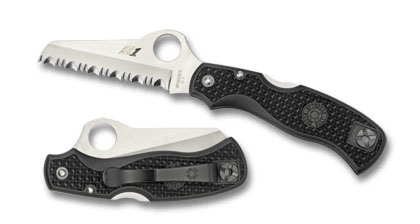 Yet another addition to Spyderco's non-rusting Salt Series knife line, the C118 Saver Salt. The blades found on all Salt Series models are made with an alloy called H-1. H-1 is non-rusting premium-performance steel that's raising interest in fishing, boating and diving circles. Why? Because it cuts for extended amounts of time before needing sharpening and it can't rust. H-1's edge retention compares to other high carbon knife steels but its most distinguishable characteristic is that its nitrogen based as opposed to carbon based. Carbon is the instigator in creating rust when it reacts to chloride. It's also what makes a blade hard and stay sharp. Nitrogen also makes steel hard and edge retentive but it doesn't react with chloride, so it cannot rust. Saver Salt's Sheepfoot blade is rounded at the tip for cutting around inflatable watercraft, flesh and in emergencies. No pointed tip means no accidental puncturing. The blade is flat-saber-ground for cutting excellence in and out of water. The oversized 14mm Spyderco Round Hole works for opening/ closing even if hands are gloved, cold or wet. Available in black or marine yellow, the fiberglass reinforced nylon resin the handle comes textured with a grip-sticking waffle pattern. An ambidextrous tip-up pocket clip also houses a lanyard hole for a variety of carry possibilities.  Please note that the clip on this knife is black.