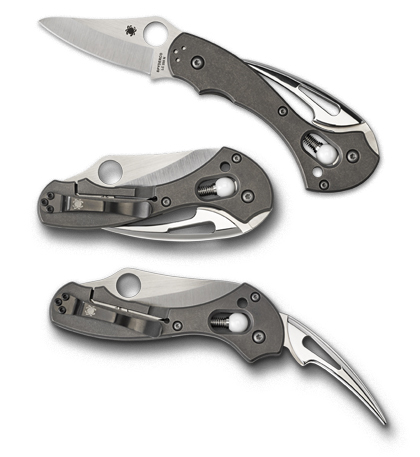 The original concept of the Tusk was conceived by Sal Glesser in the early 1980’s. More than 25 years later, his son Eric picked up the project and made it a reality, creating a truly extraordinary multi-function mariner’s tool. The Tusk’s handle is precision machined from two slabs of solid titanium. One end houses a Plain Edged blade ground from LC200N steel—a nitrogen-alloyed tool steel that offers extreme toughness and superior corrosion resistance—and locks open via a sturdy Reeve Integral Lock (R.I.L.) mechanism.

At the other end of the Tusk’s handle is a 300-series stainless steel marlinspike, which features a unique round-to-square cross section for increased leverage when loosening knots. A milled slot in the marlinspike’s body and the gap between it and the handle also serve as shackle keys for unscrewing and tightening threaded shackles. To allow the marlinspike and its shackle key to withstand extreme leverage during use, it locks securely in place with Spyderco’s patented Ball Bearing Lock™ mechanism containing a special ceramic ball. Constructed entirely of highly rust-resistant, state-of-the-art materials, the Tusk literally began as a tool that was ahead of its time, but whose time has now come.