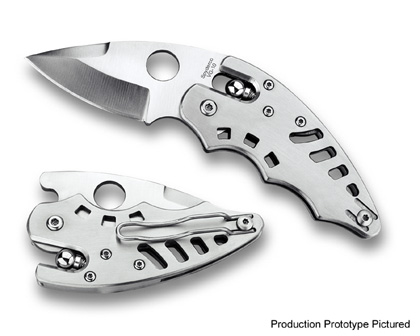 A pollywog represents metamorphosis in the animal kingdom, adapting and changing its form to survive in its environment. The same principle applies here. The Spyderco Poliwog CLIPIT® thrives in a small-knife-friendly environment while keeping the features necessary to excel in a harsh, heavy cutting and performance setting. Its distinctive opened-ended Ball Bearing Lock™ exposes the knife's inner workings for easy cleaning and rates as one of Spyderco's highest strength locking mechanisms. Pulling back on the ball unlocks the blade ambidextrously from either side of the knife.

The hand settles on the curved handle positioning the index finger into a choil that optimizes control and generates less fatigue and pressure on the hand during cutting. Made from VG-10, the blade has a hollow-ground edge with a weight reducing swedge-grind extending mid-spine to the tip. It is available in PlainEdge. Its ambidextrous wire-tension pocket clip sets the Poliwog tip-up in the pocket.